"I realise that some of my criticisms may be mistaken; but to refuse to criticize judgements for fear of being mistaken is to abandon criticism altogether... If any of my criticisms are found to be correct, the cause is served; and if any are found to be incorrect the very process of finding out my mistakes must lead to the discovery of the right reasons, or better reasons than I have been able to give, and the cause is served just as well."

The Potency of a Reverse Swinging Yorker

"What’s the use of law research? Even if there is good research, that doesn’t get translated into law reform. So what’s the point?" 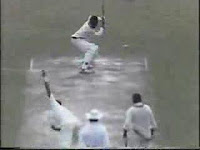 This flurry of questions was what I had to face last night from a friend of mine for which I had no answers. Without knowing that the stumps I was trying to protect were broken into minutely thin shards sized ultra vires rei familiaris oculum and noticing the tomblike silence on the other end of the line, the friend had to say: “I know you don’t agree with me but this is my experience”. I had to swallow my pride and meekly concede: “I am not clear on where I stand so I’ll not enter into a debate.” The friend’s opinion about the futility of legal research in India has been irking me since then.
I thought my tame surrender to the yorker was endemic probably due to my inability to get into a verbal duel without warning. So I tried to put another friend of mine in the same spot. We were chatting (on google) about what guys of our age speak often- future law life (yeah we are lawyers at the fag end of our youth). My friend wanted to become an academic. Gleefully, I sharpened my knifes and typed: “What’s the point in being an acad? Academicians have hardly contributed to law reform in India.” For a few minutes, I didn’t see the usual chatbox message “XYZ is typing”. Trying to regain his senses after being hit on the helmet by a Harold Larwood bouncer, my friend replied: “I didn’t expect this provocation”. I knew he was standing on the precipice, on the verge of falling into oblivion. He did. This was how: “Even prominent academicians like ABC, DEF, are of the same opinion”!
I was stunned at the capitulation of my friend who breathes, eats and sleeps legal research. I still fail to give in because of my optimism about how legal research can lead to law reform. Am I right, or do you think I am suffering from cognitive dissonance?
See, Adam Liptak, When Rendering Decisions, Judges Are Finding Law Reviews Irrelevant, New York Times (19.03.2007) who bowled a similar reverse swinging toe-crusher and the responses (and reactions) to Liptak by Althouse, Berkeley Jurisprude,& Indiana Law Blog
Posted by Badrinath Srinivasan at 10:04 PM

Jasmine writes about issues pertaining to public law . She teaches law at TNNLU, Trichy and some of her areas of interest are interpretation of statutes, constitutional law, and election laws.

Badri writes about arbitration, contract law and other private law aspects. He works in a corporation. He is a Member, Chartered Institute of Arbitrators and a Fellow, Insurance Institute of India. He can be contacted at lawbadri@gmail.com